BJJ and Judo are as close as any two sports in the world. Both derive from the militant Japanese martial art of Jujitsu and both are the most preeminent grappling arts in the world today beside wrestling and sambo. Despite their similarities however, there is a world of difference between the two sports from a philosophical, physical and utilitarian point of view. So which is better to learn? In this guide we try to answer BJJ vs Judo and which is best to learn.

Who Should Learn BJJ?

The old Gracie adage is” jiu jitsu is for everyone”. Undoubtedly this is a true statement, though it can be altered to say, “jiu jitsu is for everyone who wants to try”. BJJ is certainly one of the most effective martial arts in the world today – the success of its practitioners in MMA being a testament to that. That doesn’t mean BJJ is right for you if it doesn’t align to what your fitness and mental goals are. Here is a summary of who we think BJJ is best and not best for.

The biggest limitations with BJJ is the lack of takedown or stand up techniques. Even an advanced BJJ practitioner is only as good as their ability to get an opponent on the ground to effectively use their jiu jitsu. It is for this reason most BJJ schools also teach takedown techniques in addition to pure jiu jitsu. If you do not care much about striking or takedowns however, and want to get skilled at ground fighting, the jiu jitsu is the best sport for you.

The best starter GI on the market. Go to your first Jiu Jitsu class with the right gear! 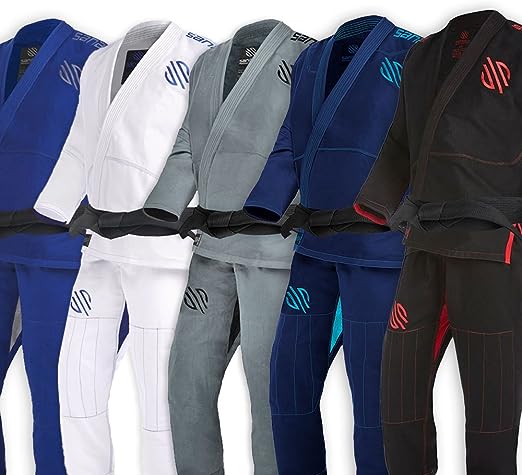 View on Amazon
We earn a commission if you make a purchase, at no additional cost to you.

Who Should Learn Judo?

Judo is a ‘sport’ martial art in that it puts emphasis on physical improvement and competition. Since most Judo is done in a Gi, there are less direct application in the real world. That being said, Judo is still great to know for self-defense, but probably should not be one’s main reason for doing the sport. Here are some pros and cons of learning Judo.

Almost all of the most common submissions in BJJ derive from Katame-Waza, but most Judo schools may dedicate less than 20% of class time to those techniques. Thus, if you want to improve your ground game, then BJJ is for you. If you want to learn how to hit people with the Earth from standing, then it’s Judo.

From a cultural standpoint, there is generally less formalness in BJJ than there is in Judo. Many of the customs and traditions from Judo have moved to BJJ, but they are not as ubiquitous. BJJ schools, especially those with MMA backgrounds, may ignore formalities such as bowing, saying “Oss” or lining up in belt ranking order. One of the most traditional symbols of BJJ, the gi, may also not take sharp emphasis in some schools.

Judo is literally the “Gentle Way” and most of the martial art flows from that philosophy. Judo is not an “aggressive” marital art in the sense it is the redirection of your opponents energy and a “self-defense” martial art. The principles of Judo are often examined in real life scenarios unrelated to just the sport. Almost every school will emphasize wearing the Gi and will have formal requirements for bowing and lining up in belt rank order.

Is Judo or BJJ Best for Self-Defense?

There is no easy way or real scientific way to answer this. Self-Defense in terms of a street fight is wildly unpredictable and what is best often depends on the fight. We would say if a fight goes to the ground, BJJ is going to best serve you. If you entangle with someone while standing up, Judo can be very handy. As we said before though, almost every Judo technique is taught in a Gi. Few schools offer nogi Judo. If you do not know how to get your grips without a Gi, Judo won’t be very helpful for you. Therefore we would have to give the edge to BJJ as a self-defense martial art.

Is Judo or BJJ Best for MMA?

This is a complicated question to answer. Nearly every MMA practitioner knows at least a little jiu jitsu (though MMA jiu jitsu is its own form at this point). If they do not know any jiu jitsu, they will supplement it with wrestling. There are very few, if any, professional MMA fighters who only train in striking and judo and do not have any ground experience.

That being said, MMA fighters who do know Judo tend to perform very well. Perhaps the most famous and successful UFC Judoka was Ronda Rousey. Rousey was at one time an Olympic medalist in Judo before transitioning to MMA. During her run of dominance, Rousey used her Judo skills to perform brutal takedowns on her opponents which lead to a submission on the ground.

The main issue with Judo in MMA is going from the Gi to not even wearing a shirt in the Octagon. You also are wearing gloves. This makes getting grips much harder than a traditional Judoka will be used to. To effectively use Judo in MMA, you would almost need to relearn all of your techniques with the 4oz gloves and on a shirtless opponent.

Both Judo and BJJ are famous for the belt systems. Unsurprisingly the belt systems are highly similar due to their shared history. Both sports reserve the blackbelt as the highest level of mastery. Both also offer red belts as honorary belts given to grandmasters. They also both start off with white belt for novices.

It is at that point the two systems diverge however. The BJJ belt system is very straightforward. For adults you start at white, then blue, purple, brown and black. Between each belt you receive stripes to mark your progression. In the majority of schools, you will need to earn four stripes before advancing to the next belt (though there are exceptions). Once you achieve blackbelt, you will receive increasing degrees of blackbelt, roughly every 3 to 5 years. The highest level of blackbelt is a 6th degree blackbelt which can take upwards of 26 to 28 years to achieve (8 to 10 years black + 3 years x 6 degrees). After the 6th degree, you receive a Coral belt which is red and white.

Kids who being their training in BJJ before their 16th birthday start within the kids ranking system. Like adults they start at white belt, but advance first to a gray belt, then yellow belt, orange belt, green belt and then once they hit 16 years old are eligible for a blue belt and then continue with the adult system. Not every child needs to earn every belt in the kids system however. For example, if you start training at 13, earn your gray belt at 14, and then turn 16 with your gray belt – you will be promoted to a blue belt.

The Judo belt system is a little less straightforward. Judo belt systems differ from country to country. For the purpose of this guide we will stick to the American system. In Judo, the colored belts are called Kyu. As we said before, you start as a white belt like in BJJ. However, in Judo you do not earn stripes. Rather, you progress faster to other belt colors. In Judo you’ll move from white to yellow to orange to green to brown. After brown you will earn your black belt which is called your shodan blackbelt or 1st dan. Like in BJJ, you continue to earn Dan(equivalent to degrees) on your blackbelt.

In Judo, consistent practitioners will likely earn their blackbelt in about 5 years which is significantly shorter than the 8 to 10 years usually needed for BJJ. There is a bit of a cultural difference in blackbelts in both sports for this reason. There is more revere placed on the BJJ blackbelt, whereas in Judo, there is the mentality that your journey is only beginning when you earn your blackbelt.

Judo is the mother martial art to Brazilian Jiu Jitsu. The art of “katame-waza” or “grappling techniques” is one of the main pillars of the sport of Judo and would go on to form the preliminary basis of jiu-jitsu. The sport of what we now know as Judo comes from Japan which itself is derived from the Japanese Jujitsu. Judo was brought to Brazil by Mitsuyo Maeda who through a fateful partnership with Carlos Gracie would go on to found Brazilian Jiu Jitsu.

From that point on, Judo would go on to develop on its own in Japan and BJJ would flourish in Brazil under the tutelage of the Gracie family. The competitive nature of Judo allowed it to become an Olympic sport in the late-50s. Meanwhile for the next 50 years, BJJ would remain relatively unknown outside of Brazil. It wasn’t until the Gracies began immigrating to the US in the late-80’s, early-90s did it start gaining in popularity.

The turning point for BJJ came in 1993 when Royce Gracie won UFC 1. The tournament style UFC 1 featured 8 combatants from other martial arts. In the end it would be BJJ that won the whole thing. Royce’s continued success led to a surge in popularity in Jiu Jitsu. To this day, BJJ continues to see increased popularity year after year.

The best starter GI on the market. Go to your first Jiu Jitsu class with the right gear!

View on Amazon
We earn a commission if you make a purchase, at no additional cost to you.

Should You Learn Judo or BJJ?

In conclusion, Judo and BJJ are both incredible martial arts that will serve different purposes for people. We have to say if your goal is self-defense or MMA, BJJ is probably the best option for you. If you want to start your BJJ journey, use our site to find a BJJ school near you.

If you are looking for a physically rigorous sport (not that BJJ isn’t either) that emphasizes a little of bit of everything but also exudes a positive philosophy, then Judo is the sport for you.